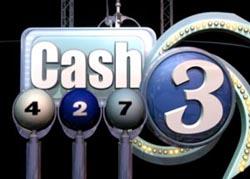 We know for a fact that the house never loses and the reason this happens is that the commission charged by the gambling agent always offsets luck on the long run. Whether you choose sports betting, casino games or a popular lottery games such as Cash 3, you should know that the house has an edge. This varies from game to game and only by discovering its true value, players can make an educated decision about whether to keep playing or seek an alternative.

In many states throughout the United States, the lotteries organized this game and there is no shortage of players who hope to make some easy money. Due to the fact that Cash 3 games are legal and very simple, players don't need to have any experience and very few of them even consider the house edge. Basically the player has to choose a number between 0 and 999 and the only real choice is whether to play it as a box or a straight.

These are three digit numbers, which means that a straight play implies the fact that exactly the chosen number will come, while a box that means that any number that contains those three digits is a winner. The chances for the straight number to hit are considerably lower and that's why thhis kind of bet pays more than the box. Most people prefer to take their chances, because after all they are playing the lottery and count on Lady Luck to smile down on them with benevolence. A closer look at the odds will determine whether they are making the right choice or if the box back is a superior choice.

The house edge for a Cash 3 game

While it is obvious that the house edge needs to be higher than zero for the establishment to be profitable, Cash 3 is among the games who don't give players too many chances. One needs to be really lucky to offset the handicap, but this doesn't have a deterring effect on enthusiasts. In most states, roughly half of the prize pool will go to the winner, which means that the house edge is a massive 50%. If all the players would be allowed to deposit their money into an account and draw random numbers, the winner would win almost twice as much if it wasn't for the house edge.

Cash 3 is of course just an example of how the house edge bites large chunks of the lucky players ‘profits, but this is not the exception to the rule. All state lottery games have a house edge that goes beyond generous, and this means that the ones who end up on the losing end are the players. The bottom line is that lottery games depend exclusively on chance and no matter what systems one might use, in the end it is impossible to offset the house edge.

Get exclusive news for free directly on our website: